Hello to the rainy January!
Right when I thought that the unbearable part of the winters are over; it started raining and continued for two consecutive days and nights. The clouds are hugging these Margalla hills as they have never met before; and they have no plan for leaving them soon. But the weather forecast states otherwise. Nonetheless, it looks beautiful.
A few years back, I used to love winters and rains because back then I have the luxury of enjoying these views and feel the vibes it offers. I still love them but it is no longer a source of excitement. Now, I think about covering up Shazil instead of getting excited with the fresh cold air; I think about how cold it is for him instead of feeling the warmth of blankets and cuddling myself in them. And sometimes, I try hard to feel the same about the winters and rain; like I used to – but I fail.
But no worries! The child inside me still wants to jump on these puffy fluffy clouds. And that child wonders, would the clouds throw her up higher in the skies again or let her fall?
With time, fears start taking over you. Its about investing your own life instead of money. And the more you invest life as you grow up and until you grow old; the risks involved gets even higher.

Shazil has learned to give naughty smiles. He tries to get hold of his diaper while changing; and whenever I pushes away his hand; he gives a naughty smile. I believe he has now started to understand that I am asking him to behave. He screams whenever he is in playing mode. And if I say, “Chup”; by putting a finger on my lips; he smiles. Or may be, its his upper two teeth which have that effect.
And did I tell you that now he is able to sit with lesser support and if he fell sideways he rolls on his belly and tries to crawl. It is very interesting to see him struggle and after every few seconds of trying; he gets tired puts his head down for another second or two; lifts his head up and continue struggling with fake crying sound. It makes me happy to see him trying multiple times and not giving up so easily.
He had his first complementary food this week. There’s a very cool website which provide recipes for complementary feeding. Last time, when I met Shazil’s doctor and asked about complementary feeding she advised to not give him anything until he is six months but if there is a need to start between five and a half and six months start with rice. So, I used the rice recipe from this website.
The only tip is to make small portions first to see if your child will like it or not.
So, I took even less than 1/4 cup rice grind it into a powder; mixed it in boiling water slowly; added at least 5 to 6 spoons of formula milk and it was good to go! I used more than one cup of water to keep the food more liquid. It was his first time; so I wanted to make the intake was easier for him.

Shazil liked it but ate very little. He was more excited to eat like us as he has been observing us eat since he was four months. The grainy texture of the rice was different for him so after eating he made a lot of Brrrr sounds using his tongue and had even more fun.
We are meeting his doctor this week and let’s see what she recommends. 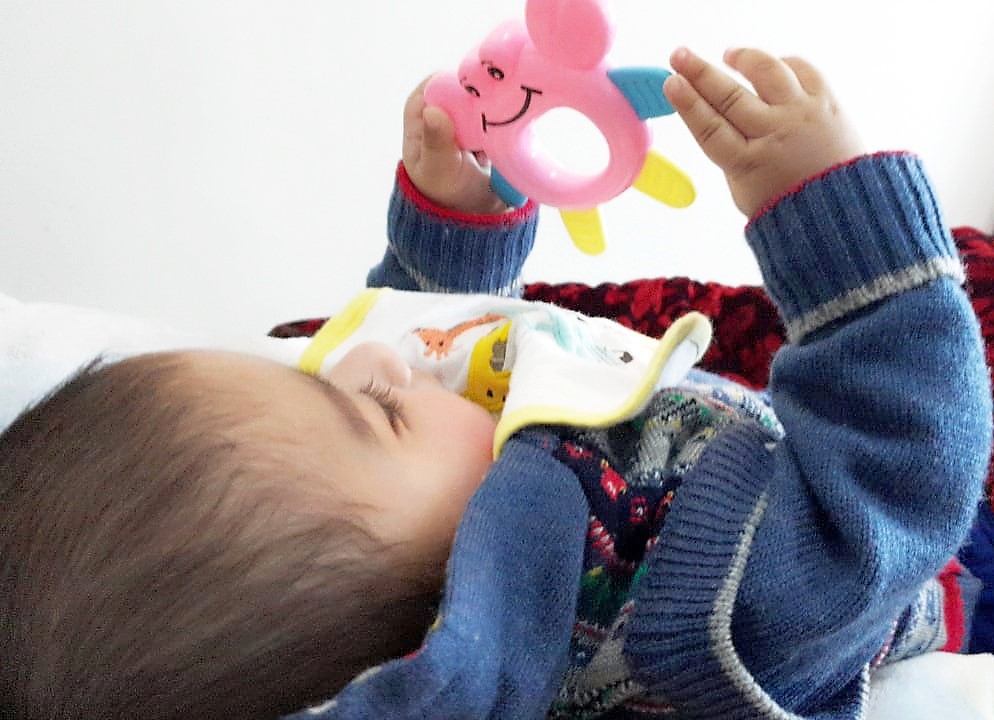 On the political side, I am deeply moved by the Sahiwal incident and the destruction of a family by CTD – killing the driver of the car; a mother, a father and a sister; of three little ones. When I think about their lives ahead; it gives me goosebumps about their survival. Apologies, convictions and punishments would not bring their parents back. Their lives would never be the same.

But that does not mean that they should not be punished! As it makes me question our safety. On our daily commute we usually see these CTD officials holding guns. So, that night I asked my husband, does this mean they can kill us too? And what story they will make out of it? I wonder…