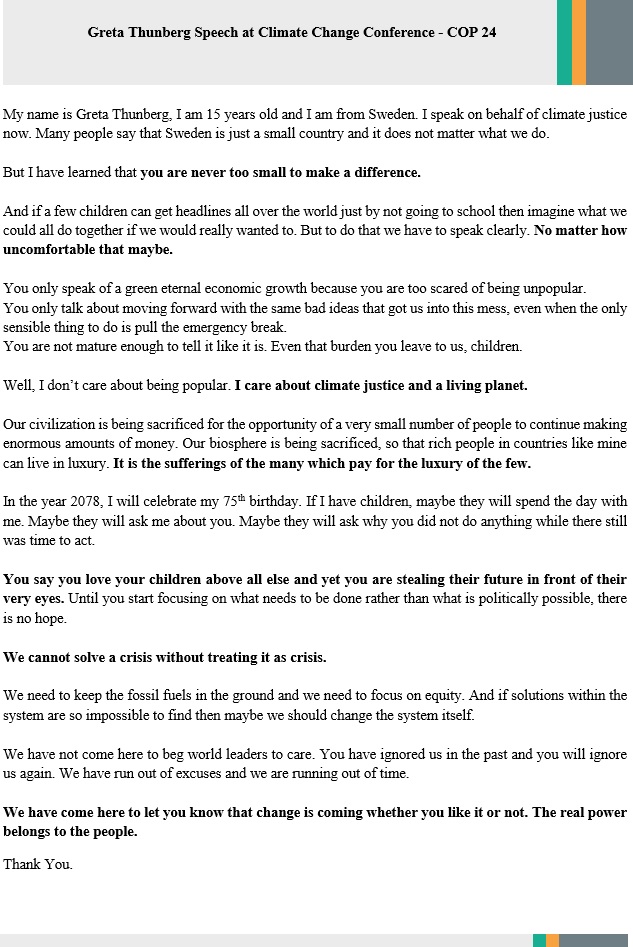 “But I have learned that you are never too small to make a difference.” Greta Thunberg, a 15 year old climate activist, speaking to the world at COP 24.

If you have not listened to her yet, then you must! And if she inspires you (which is of course she will) then you can scroll down to what it is all about!

At least she inspired me to write about the basics of Climate Change and summary of COP 24.

UNFCCC (United Nations Framework Convention on Climate Change) is one of the three adopted conventions at the Rio Earth Summit in 1992. Primary aim of UNFCCC is to prevent dangerous human (anthropogenic) interference with the climate system. Countries which have ratified the convention are called Parties to the Convention.

COP stands for ‘Conference of Parties’ to the UNFCCC. These are the representatives from the countries which have ratified the convention on climate change. It is the supreme decision making body of the convention which meets every year for:

What is the Paris Agreement?

The document of Paris Agreement can be accessed here!

What is NDC (Nationally Determined Contribution)?

These ambitious efforts of the countries to reduce national GHG emissions are termed as Nationally Determined Contributions. Paris agreement requests all the 196 countries to prepare and communicate their post-2020 climate actions. Based on these ambitions, each country should have a climate action plan in the light of their domestic circumstances and capacities.
Until now, 181 countries has submitted their first NDCs and Pakistan is one of the them.

What is Pakistan INDC Statement?

“Having considered the existing potential for mitigation in the country, Pakistan intends to reduce up to 20% of its 2030 projected GHG emissions subject to availability of international grants to meet the total abatement cost for the indicated 20 percent reduction amounting to about US$ 40 billion at current prices.”
Although, Pakistan has a very detailed NDC document, however, it is missing the concrete climate actions to achieve its NDC.

What was the purpose of COP 24?

What is IPCC's special report?

As part of the Paris Agreement, UNFCCC asked IPCC to produce a special report about the effects of Global warming at 1.5 degrees and compare effects of global warming with 2 degrees in order to emphasize that 2C limit is not adequate to avoid impacts of climate change. This report has been published in October 2018.
During COP 24, this report was put forward to be welcomed by the Parties to the Paris Agreement. However, US, Saudia Arabia, Russia and Kuwait refused to welcome the report and hence its recognition has been postponed until COP 25.

What is Paris Rulebook?

Paris rulebook is the operational manual for implementing provisions under Paris Agreement. During COP 21 in December 2015, it was decided that to implement the Paris agreement an operating manual will be finalised during COP 24.
In general, Paris Rulebook was finalised and agreed during COP 24, with a few exceptions postponed to be discussed in COP 25 – at the end of this year.

What are the main highlight of Paris Rulebook?

Talanoa refers to a process of inclusive and transparent dialogue to make wise decisions for the collective good through sharing of ideas, skills and experiences. It is a traditional word used in Fiji and across the Pacific.
Now that the blueprint (Paris Rulebook) of the machine (Paris Agreement) is there; the next question is how much fuel (ambition / NDCs) you are going to put into it. (Naoyuki Yamagishi, Climate and Energy Lead from WWF)
So, this dialogue is about how countries should raise their ambitions through NDCs to meet the long-term temperature goal.
And if a 15 year old can stand up about climate justice then why not you?